This section allows you to view all posts made by this member. Note that you can only see posts made in areas you currently have access to. 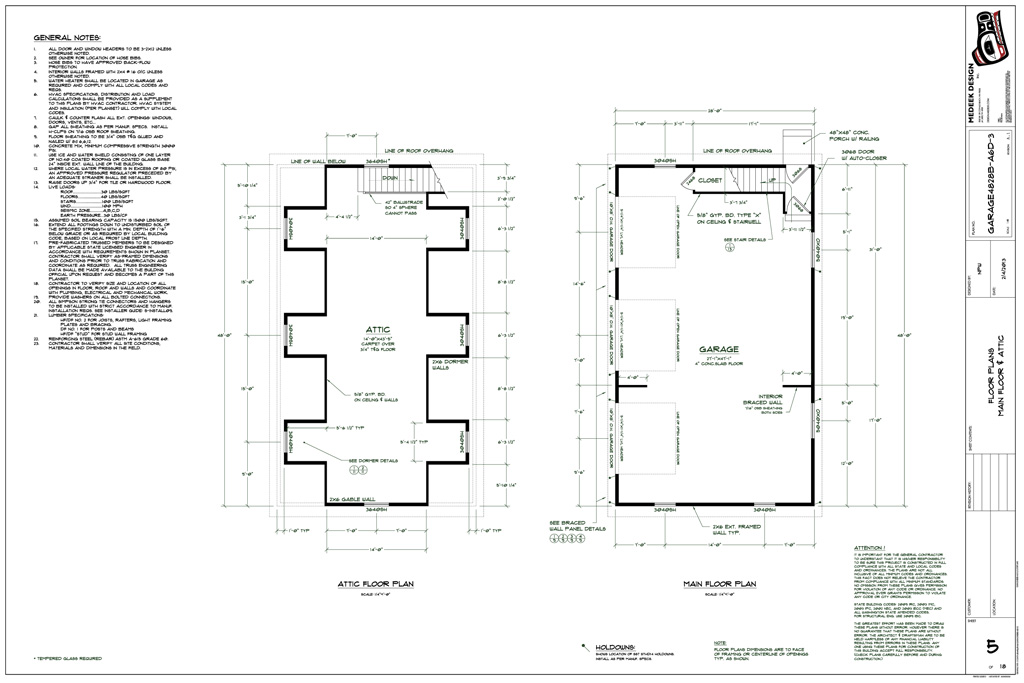 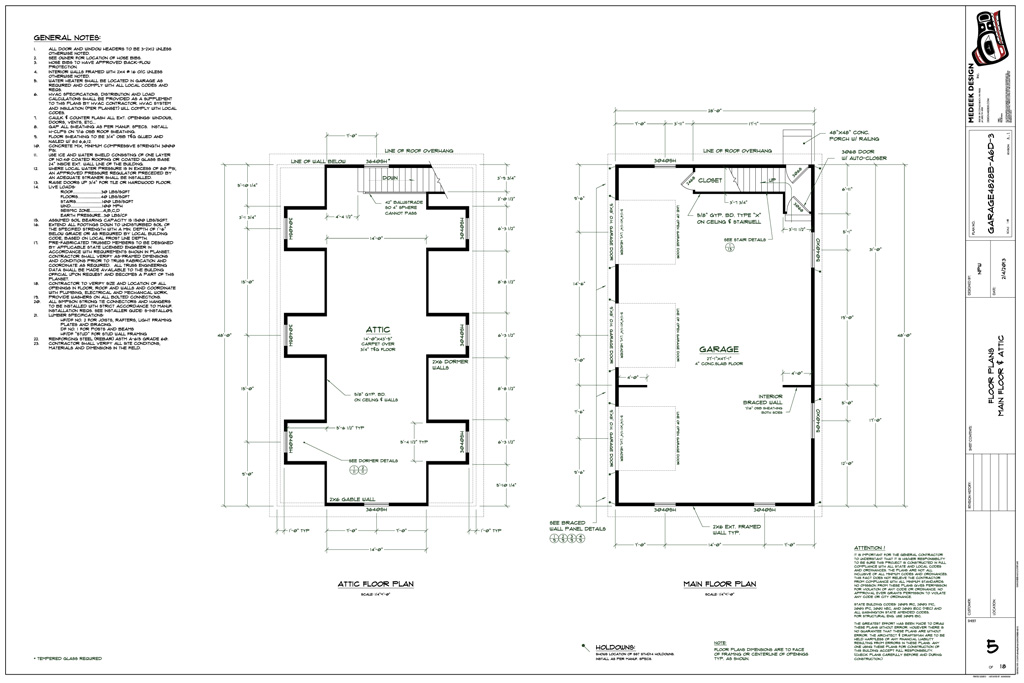 February 03, 2013, 07:04:44 PM
I'm currently also working on a modified version of planset GARAGE4828-A6D-3.  This new plan has a very similar attic space but the three garage doors are centered and the entry door is on the side of the garage.   It also have a few more windows on the main floor.  I've created some concepts below with different configurations of the garage doors for everyones review: 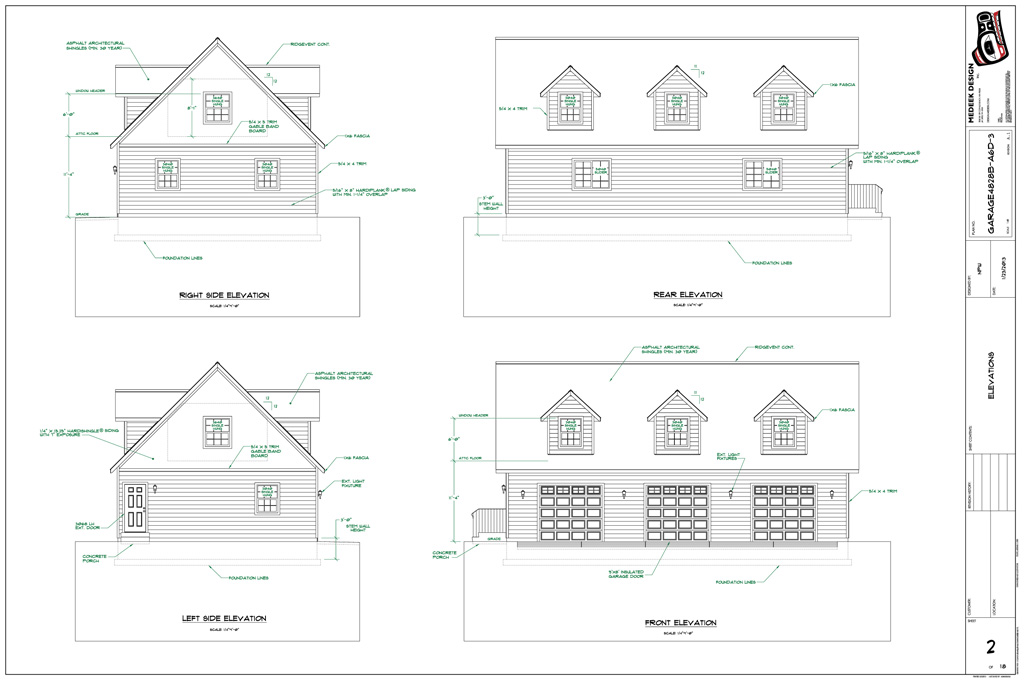 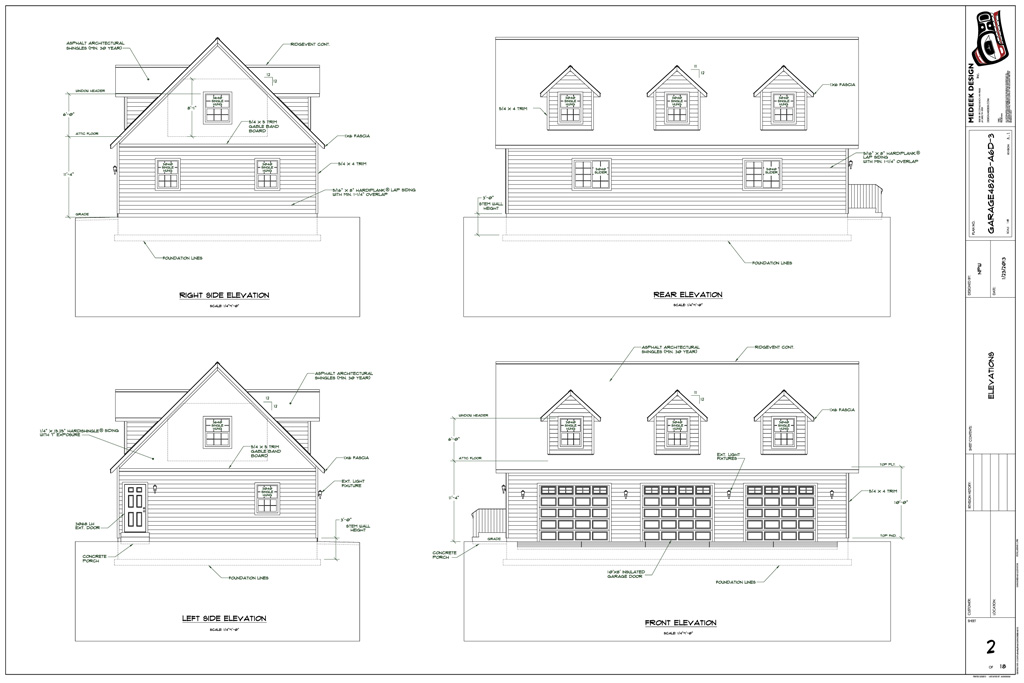 10ft doors, off center from dormers 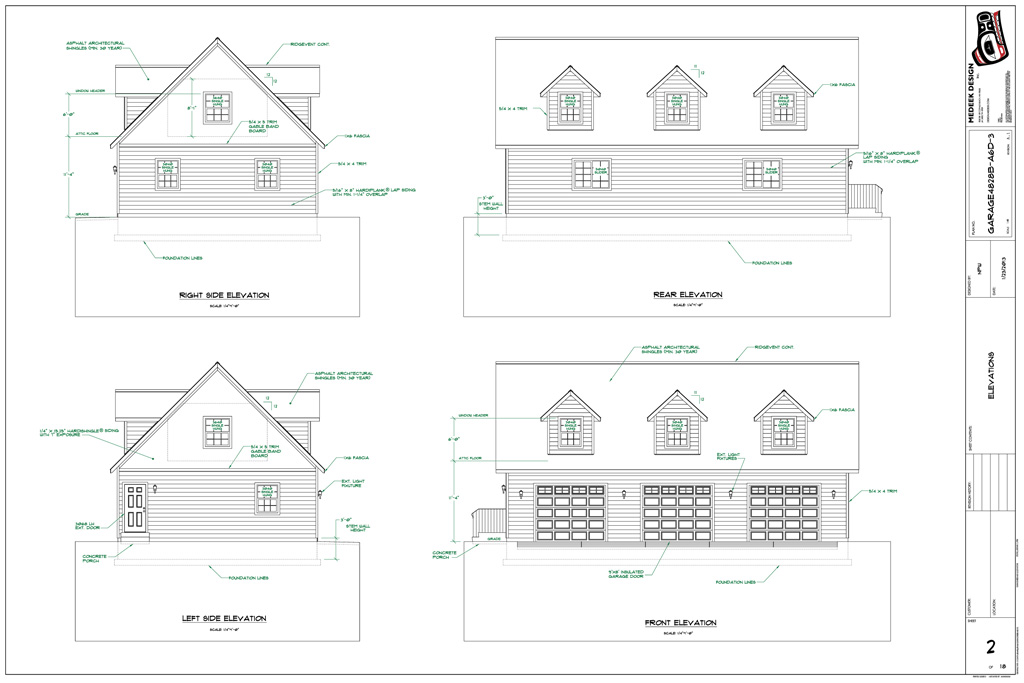 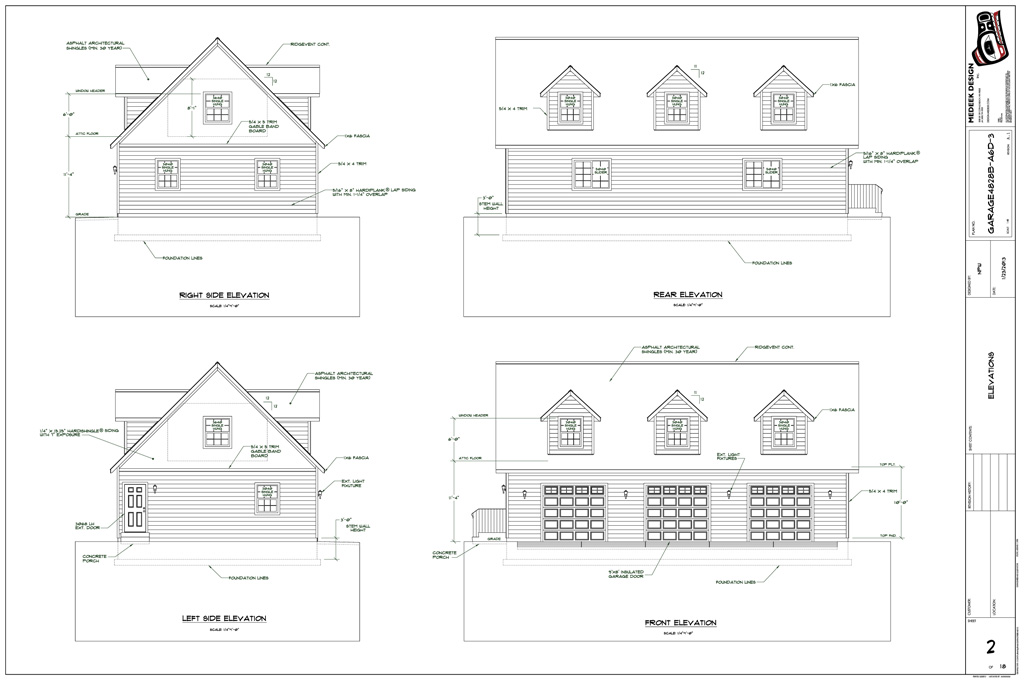 9ft doors off centered from dormers 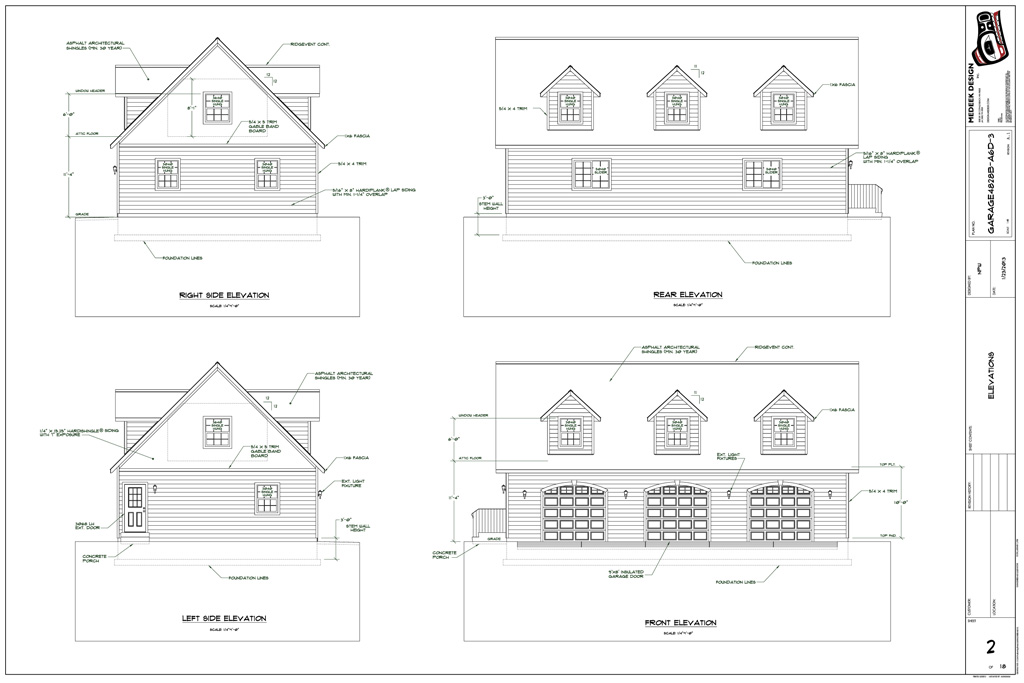 9ft doors off centered from dormers, with arched headers
#2313

January 26, 2013, 09:13:16 PM
We have recently added the CAD Library for those who might need some resources for designing their own building project.  The AutoCAD details will be some of the more standard details that I use throughout the plansets.  The Solidworks models will be mostly components that I have created for generating the 3D models of the different designs.  Check out the new CAD Library here:

January 26, 2013, 05:48:30 PM
I've been using phpBB now for about a year and I've finally decided to switch to SMF by Simple Machines.  It seems like a much better forum software.  My main reason for switch was the amount of spam I was receiving with phpBB, the spam controls are very limited, at least out of the box.

Hopefully, everyone finds this forum software to their liking.  I've also added the member map mod which is a nice bonus.  If anyone has any recommendations for stuff they would like to see added please advise.
#2315

IRC / 2012 International Residential Code for One and Two Family Dwellings

January 26, 2013, 05:14:49 PM
A huge collection of agricultural buildings provided by the University of Tennessee.  Check with current building codes in your area for compliance. 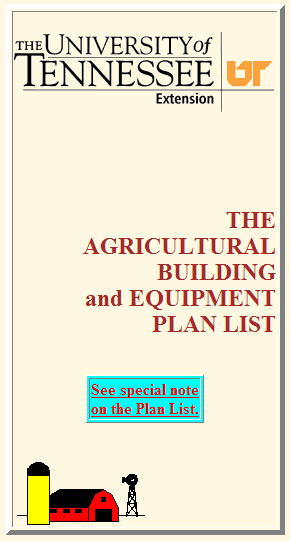 January 25, 2013, 04:13:20 PM
I talked to my HVAC sub-contractor today and we discussed the pros and cons of ducted vs. ductless systems.  My wife doesn't like the idea of heating units hanging off of the walls so I guess that settles that.  However with the attic trusses there isn't a whole lot of room to squeeze in the duct work so I mocked it up roughly to see if we can make it work.  Of course I have no idea how many registers need to go where so its more of an exercise in seeing whether or not we can get the air from the furnace in the basement and distribute it to the attic space.  I think it will work.

Anyone with HVAC experience?  In particular, ducting difficult construction like this?  I would be interested to know what you think.  With the way I have it arranged I should only have to soffit a small section in the garage and avoid soffitting in the office space or attic. 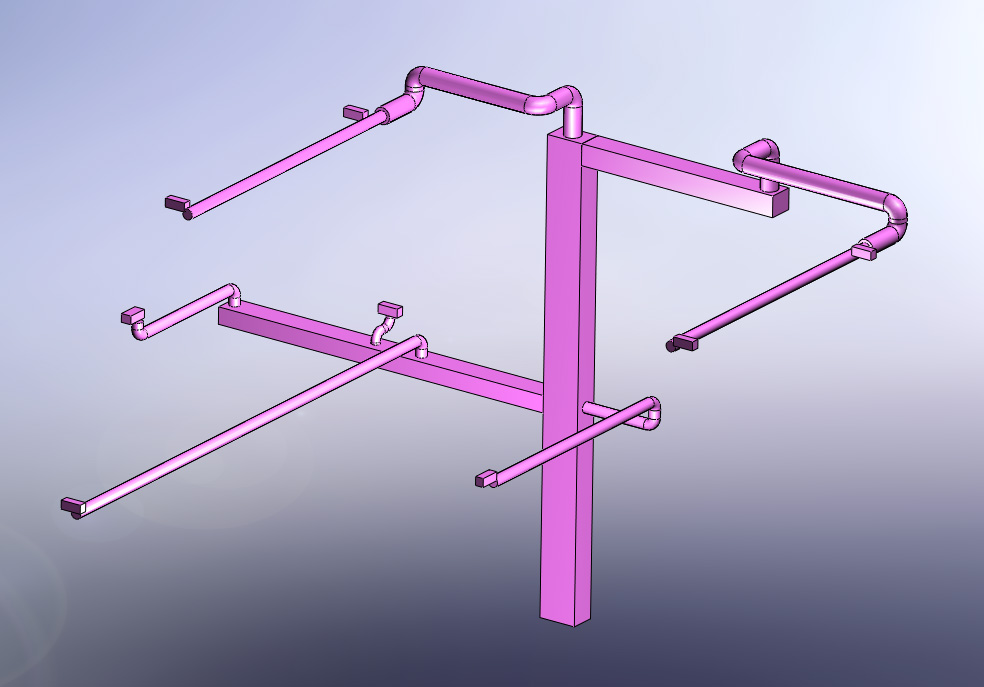 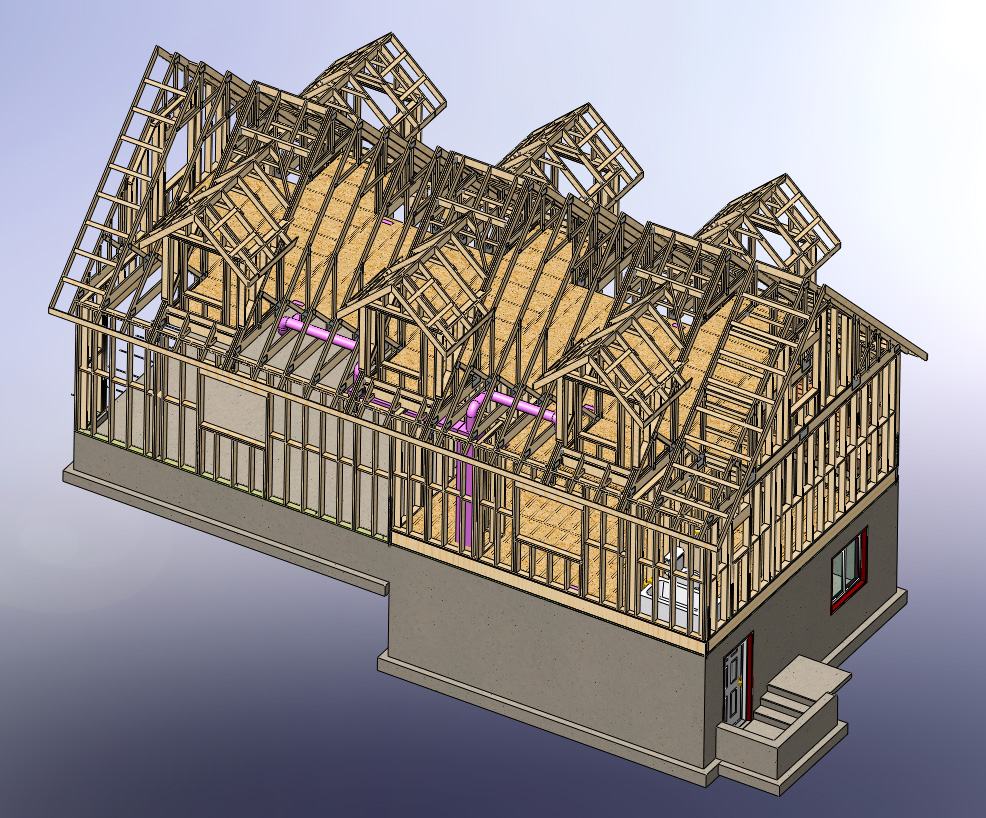 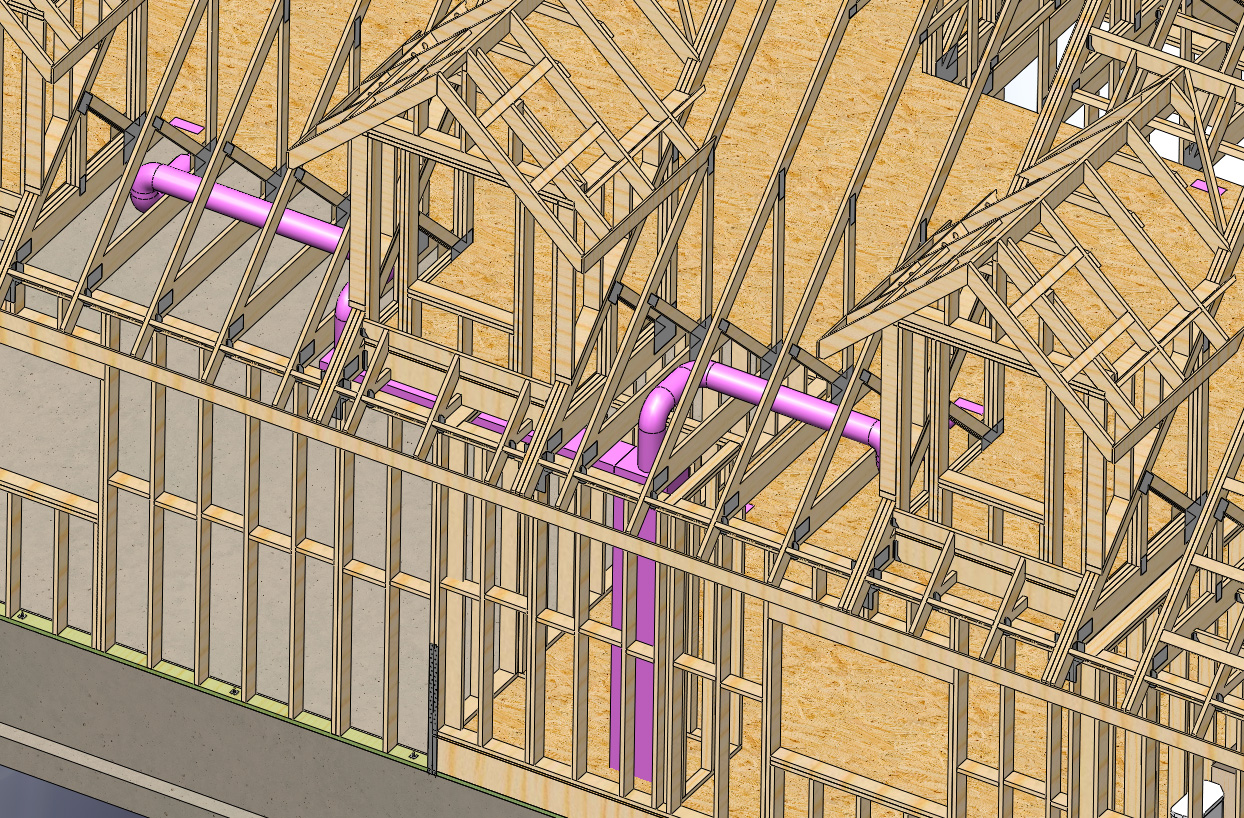 January 25, 2013, 04:11:06 PM
The attic is a bit small for a photography studio (original plan for the space).  So I decided to design a living quarters / apartment instead.  Still trying to figure out how to best frame the angled cuts with the walls as you can see from the image below.  The 60x42 whirlpool tub those has my wife sold, the bearing wall luckily is centered right underneath it.  A tub like that can way almost a 1,000 lbs full. 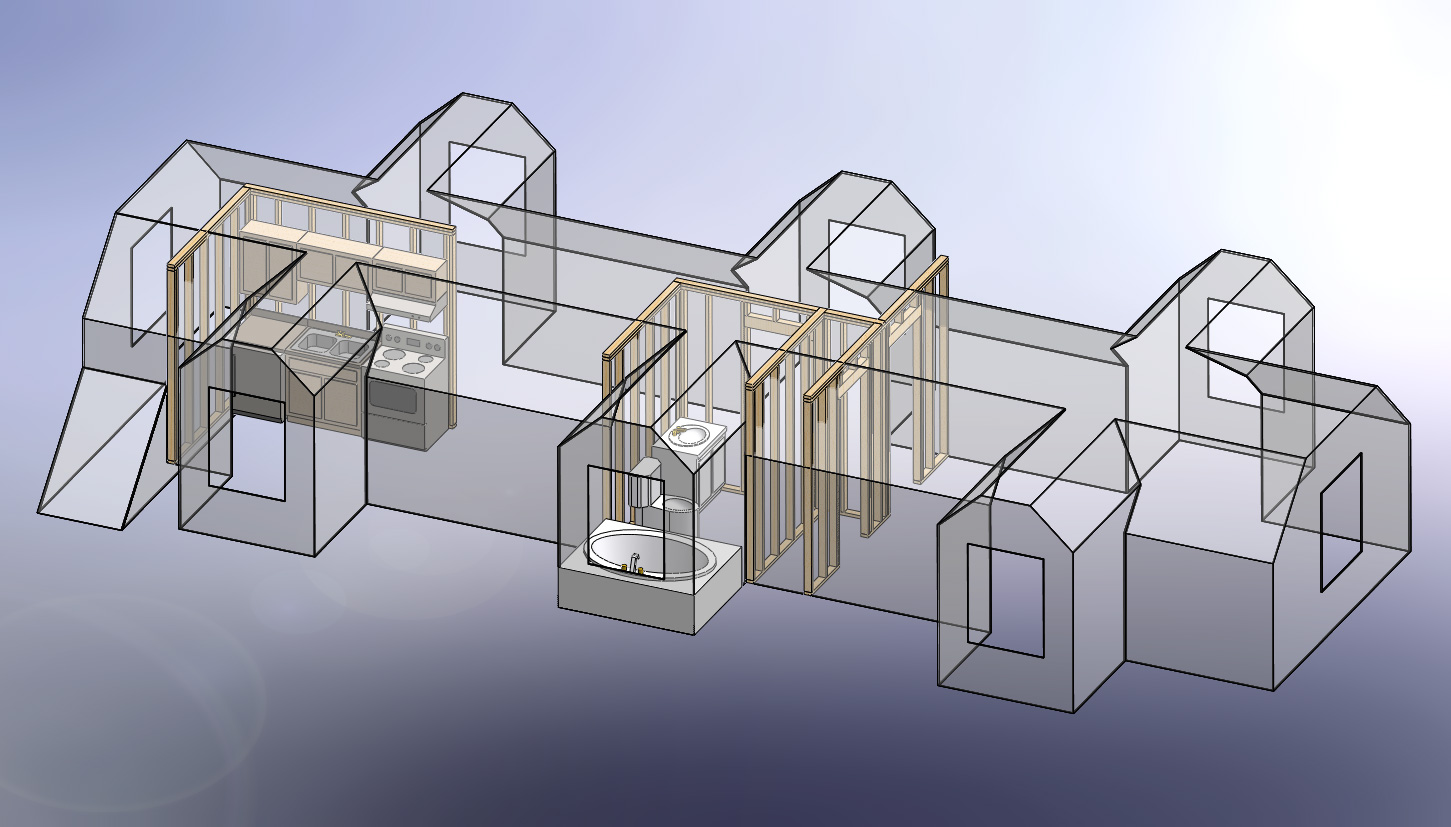 January 25, 2013, 04:09:10 PM
I've been designing this shop/studio/garage for the last couple of months, its 24x48, I might increase the size to 28x48.  Anyhow, I'm pretty new to construction so I've spend some quality time reading up on framing, concrete etc...  I think I'm almost there with the design but I found this board that has answered some of my questions so I thought I might post up some screenshots so I can get some feedback before we start spending money... 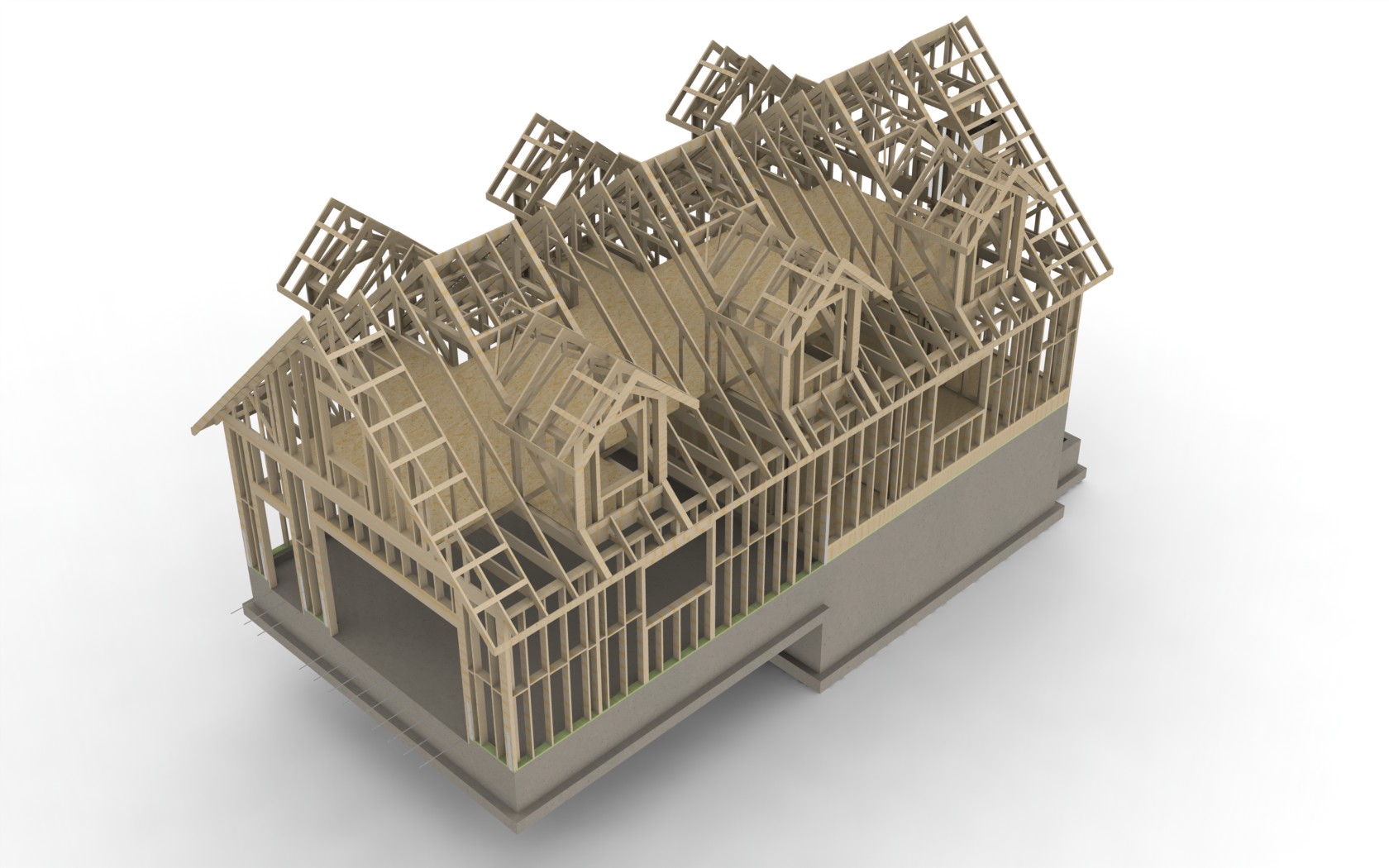 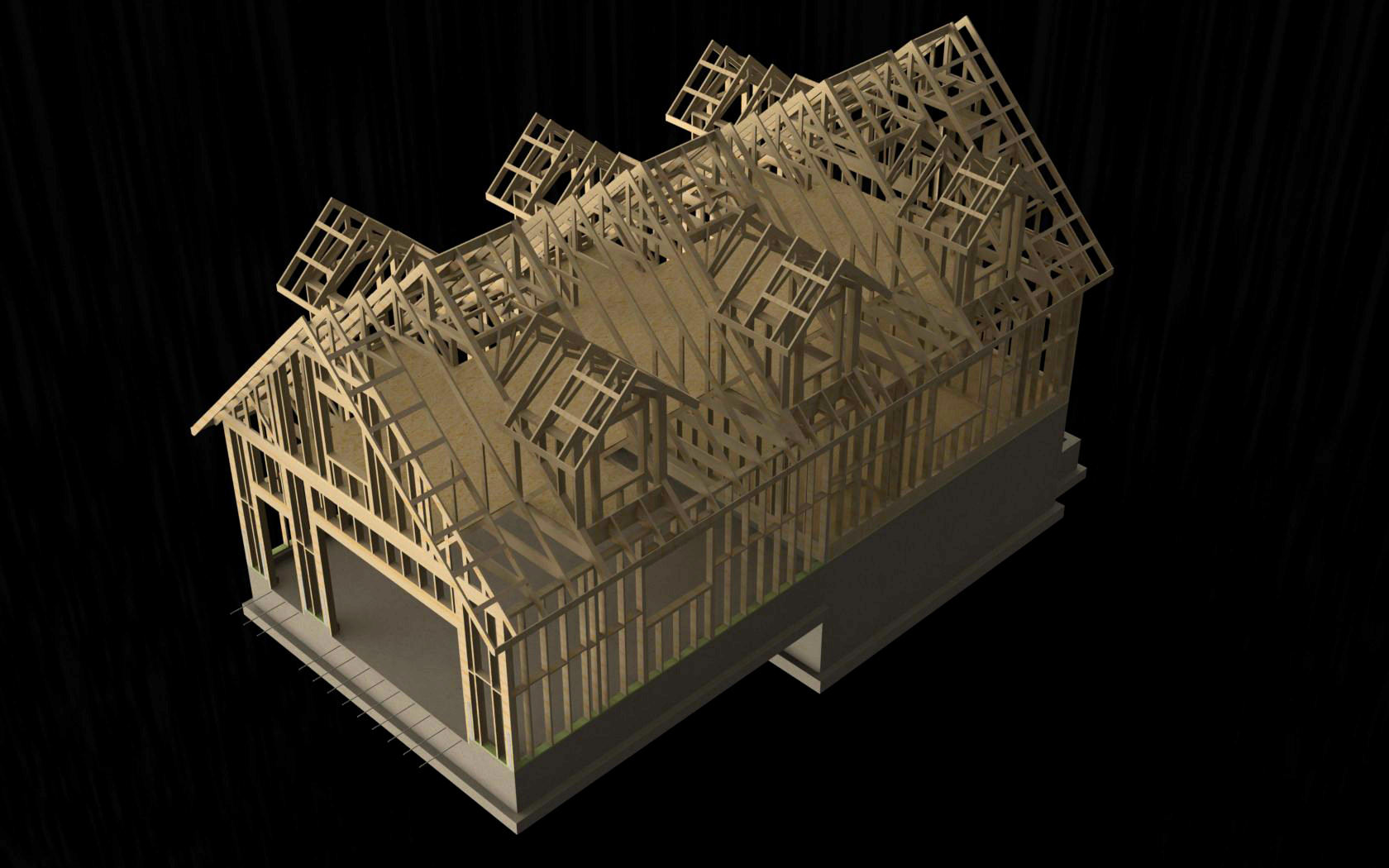 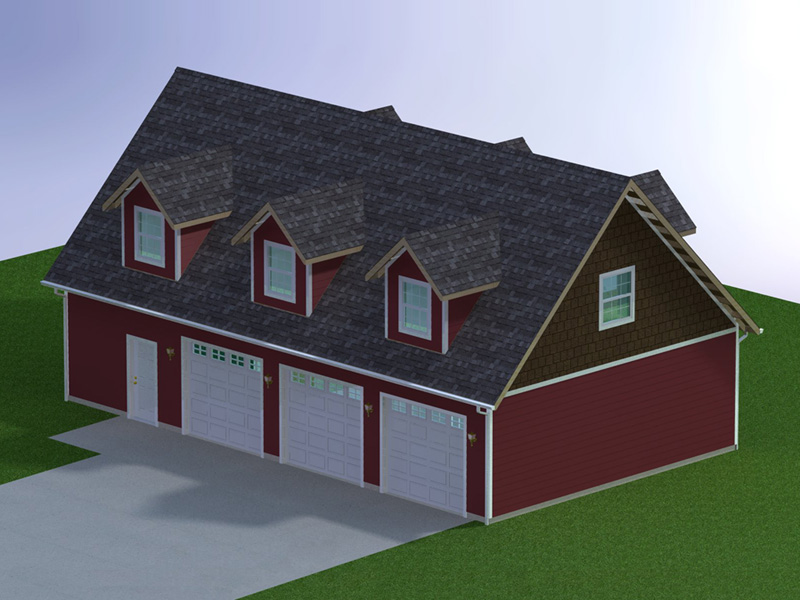 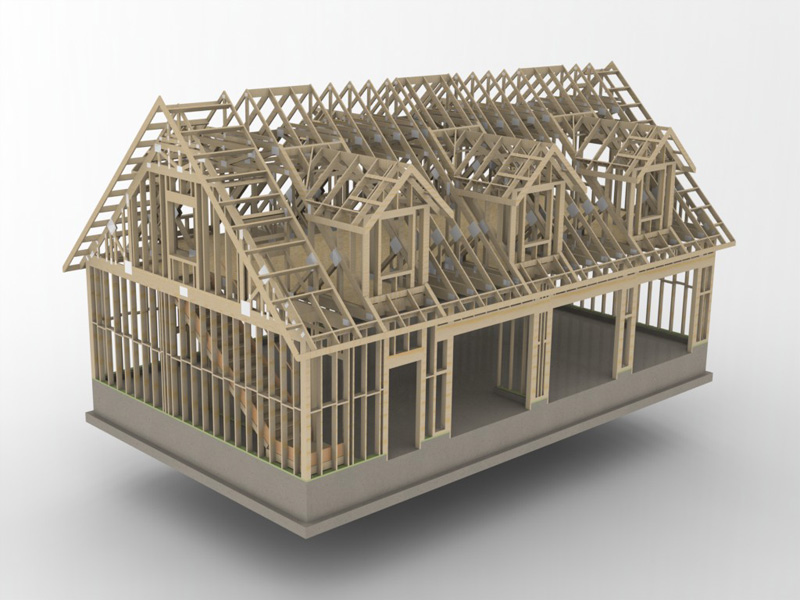 There are a few more pictures here, for those interested:

Any thoughts on what could make this design even better?
#2321

January 25, 2013, 12:52:56 PM
I'm really starting to like the idea of a deck off of the gable end, simplifies the interior framing, roof framing and eliminates all of those pesky fire code issues.

If there is a space upstairs used as an office/studio (possibly with 1/2 bathroom) etc... but not a living space or apartment (no bedrooms) then what I have is ok?  If there is a bedroom then I would need to frame a hallway/room at the base of the stairs so that egress to the exterior can be accomplished without passing through the garage.  I thought I'm up on my codes but it seems like I'm always missing something, probably the reason I'm posting on this board.

After designing the stairwell I realized as well that even if the stairwell is insulated and sheetrocked it will be cold down (cold air from the attic will tend to the lowest point) there but I would rather leave the top open then have so many doors closing the space off.  However, if there is an apartment upstair and I remove the door from the landing and frame a small room at the base of the landing/stairs then it might make more sense to close it off up top.

I would have actually preferred to frame the dormers as you suggested but when I raised the dormer height so that dormer top plate height was 8'1" the dormers looked too high to me.  On a larger span roof (higher ridge) I would probably go this route since it simplifies the dormer roof framing.

I don't prefer open soffits.  When I lived in Utah pretty much everything was closed soffits, usually aluminum soffit and fascia.  Here in Washington the norm seems to be open soffit with vent blocks between the trusses.  Maybe it has something to do with moisture or something, western WA is wet, everything molds out here, including the new dog house I just built, its very annoying. 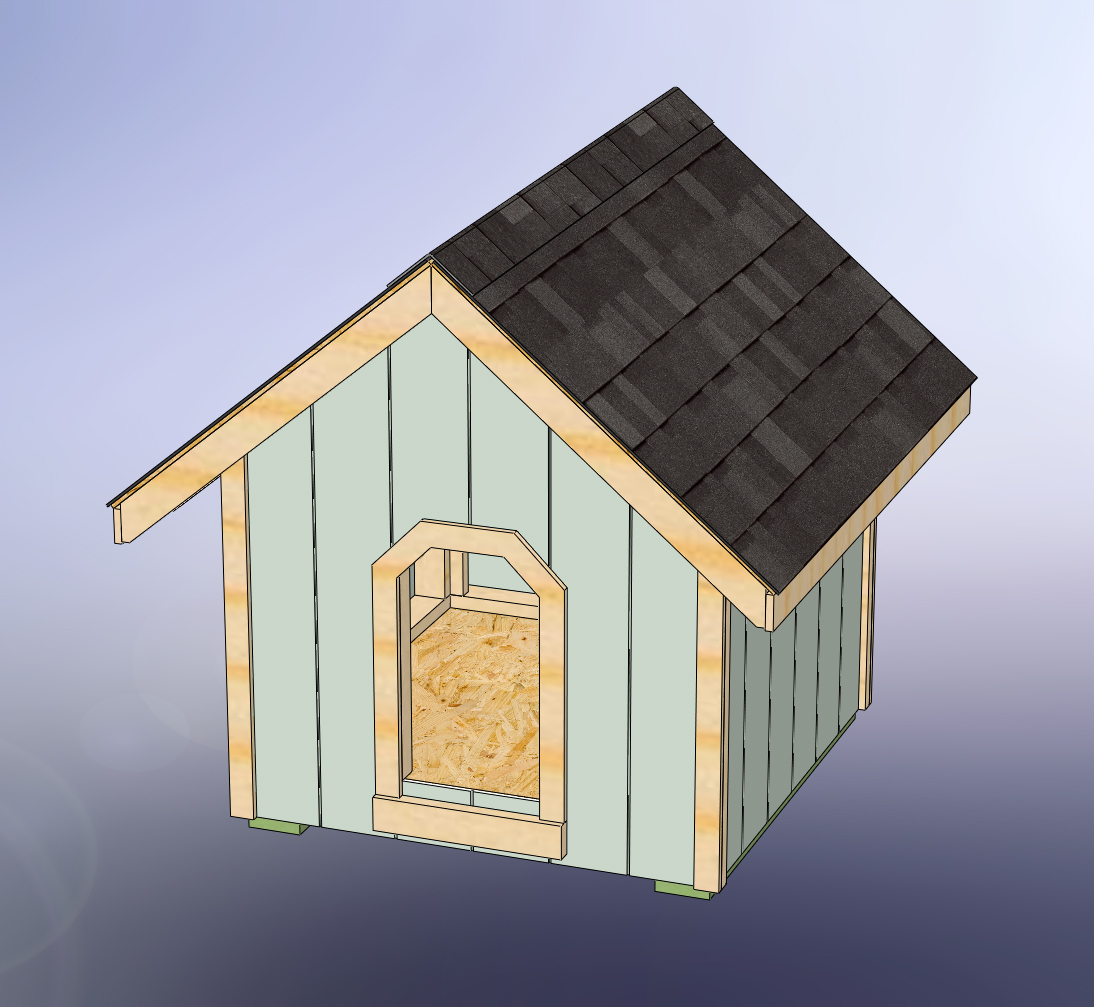 On my previous shed design I used Simpson Strongtie H2.5A to tie the dormer rafters to the dormer walls.  I will probably use those same ties for the outlookers as you suggest.  Wind uplift can be a factor and should be considered.

The sheathing joints on the roof appear to line up with the piggyback truss joint line, how convenient.  I guess my only thought is to cut the first run of sheathing in half and then it straddles it nicely but then I have a sheathing joint near the eaves which weakens that whole interface.  Not sure how to win sometimes.

I added the hold-downs into the model last night, probably a bit of overkill but it should be secure. 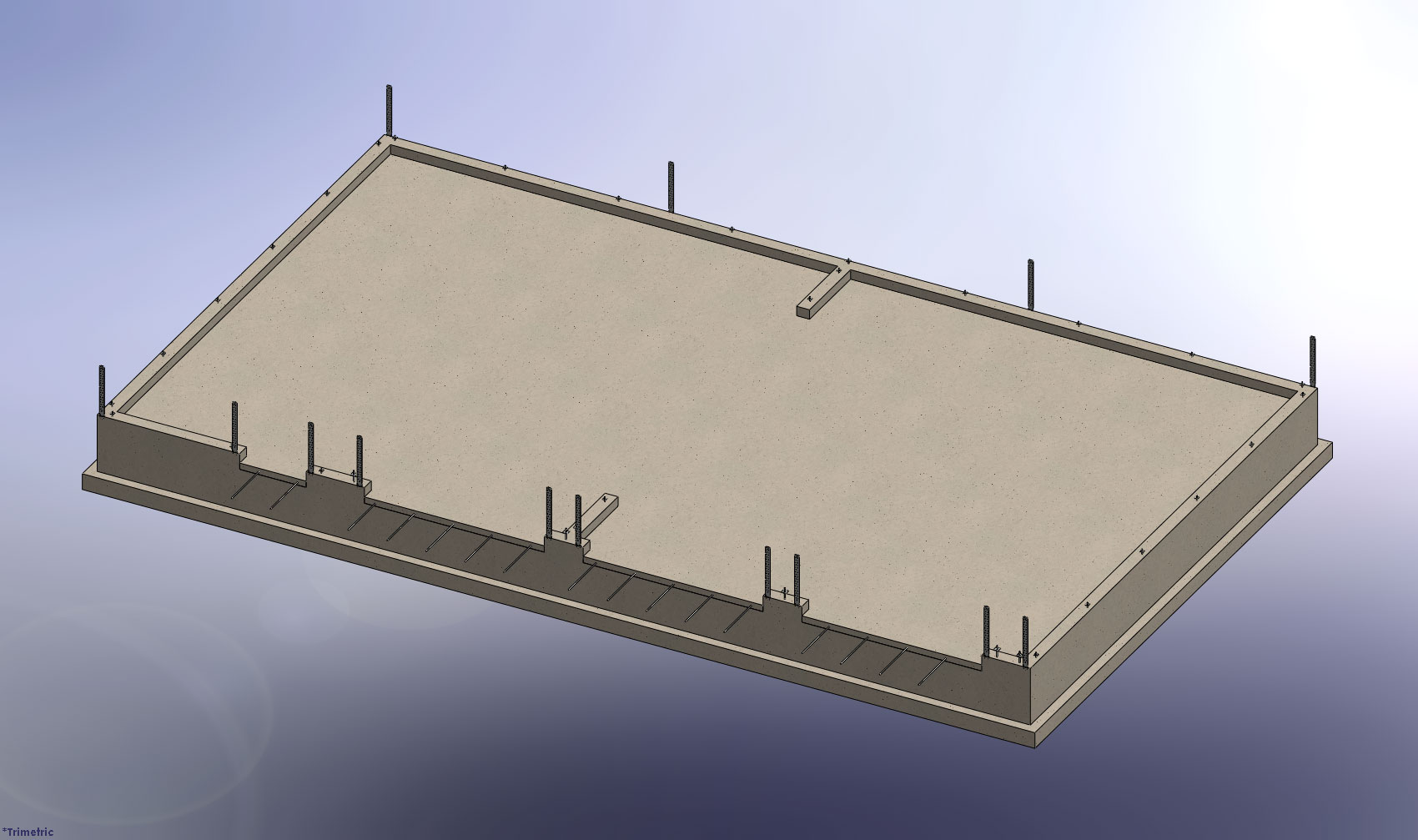 I finally got around to taking the PE exam this last October (Mechanical Engineer, Washington State).  However, I've found over the years I'm much more interested in the structual engineering field and now even architecture.  If I can find the right firm I'd like to work toward the requirements for an SE (structural engineer), two more years of experience and a two day 16 hour exam.
#2322

My current dormer framing below: 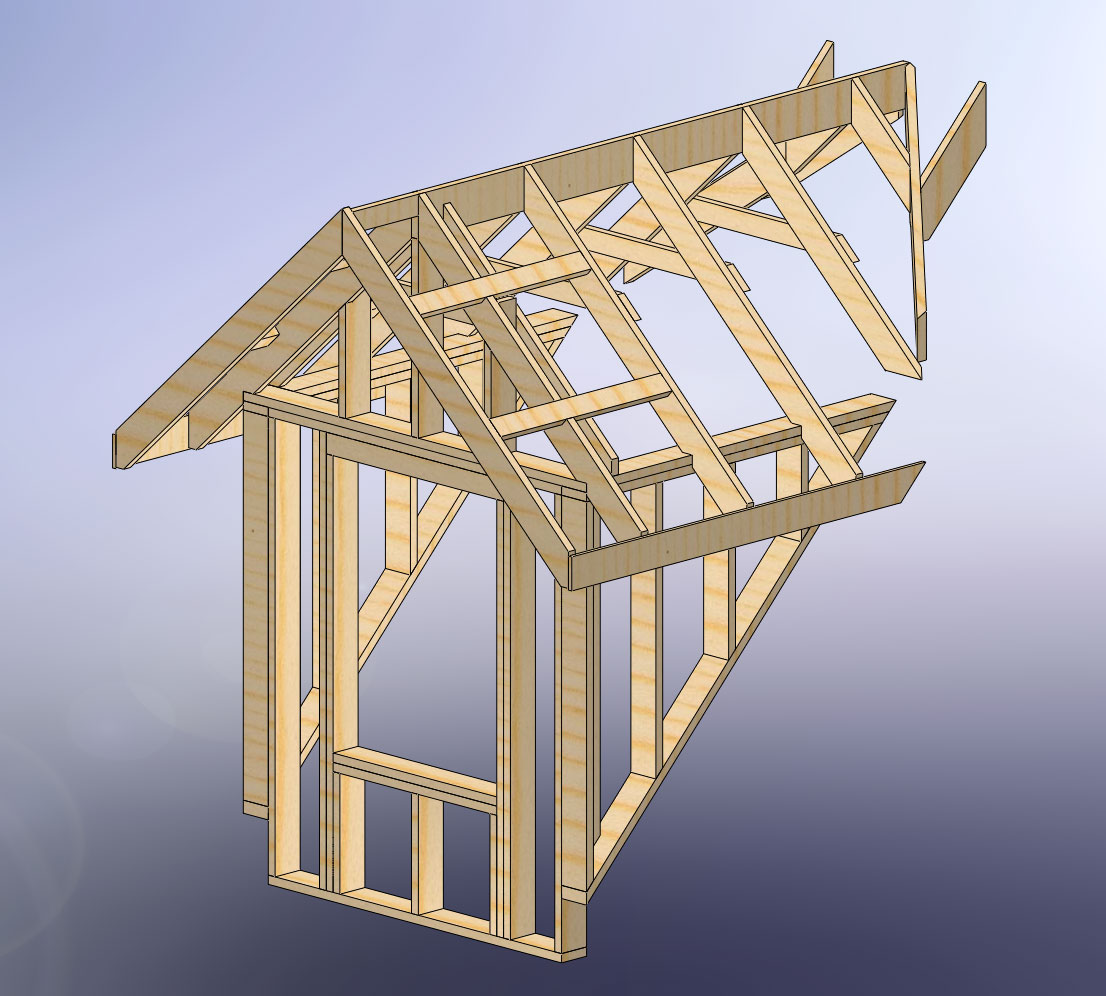 In my framing model I don't show any of the truss bracing that needs to happen between the main trusses and the piggyback trusses.   I've also omitted some the extra blocking that might be required for the sheetrocking, but most of it is there. 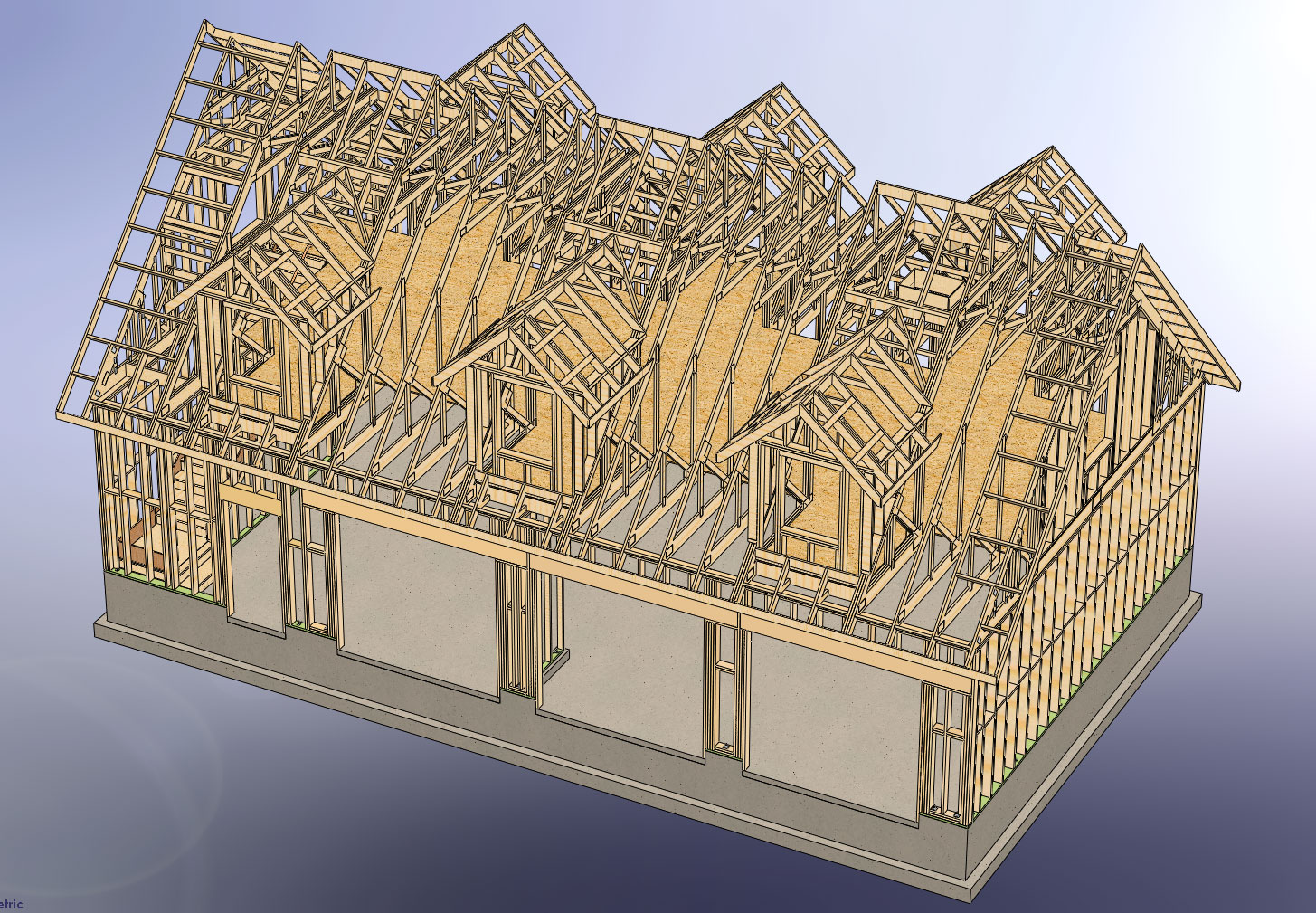 I'm assuming that with the overhangs one would simply frame solid blocking between the outlookers so that there are no "bird" holes.

With regards to the apartment up top.  I have a door with auto-closer at the base of the stairs, does this meet code?  The framing for the walls around the stairwell is on 16" centers as it should be.  I'm not exactly sure what to do with the bit of framing next to the wall where the base of the studs run into the concrete stemwall, maybe someone can enlighten me what is common practice in that case. 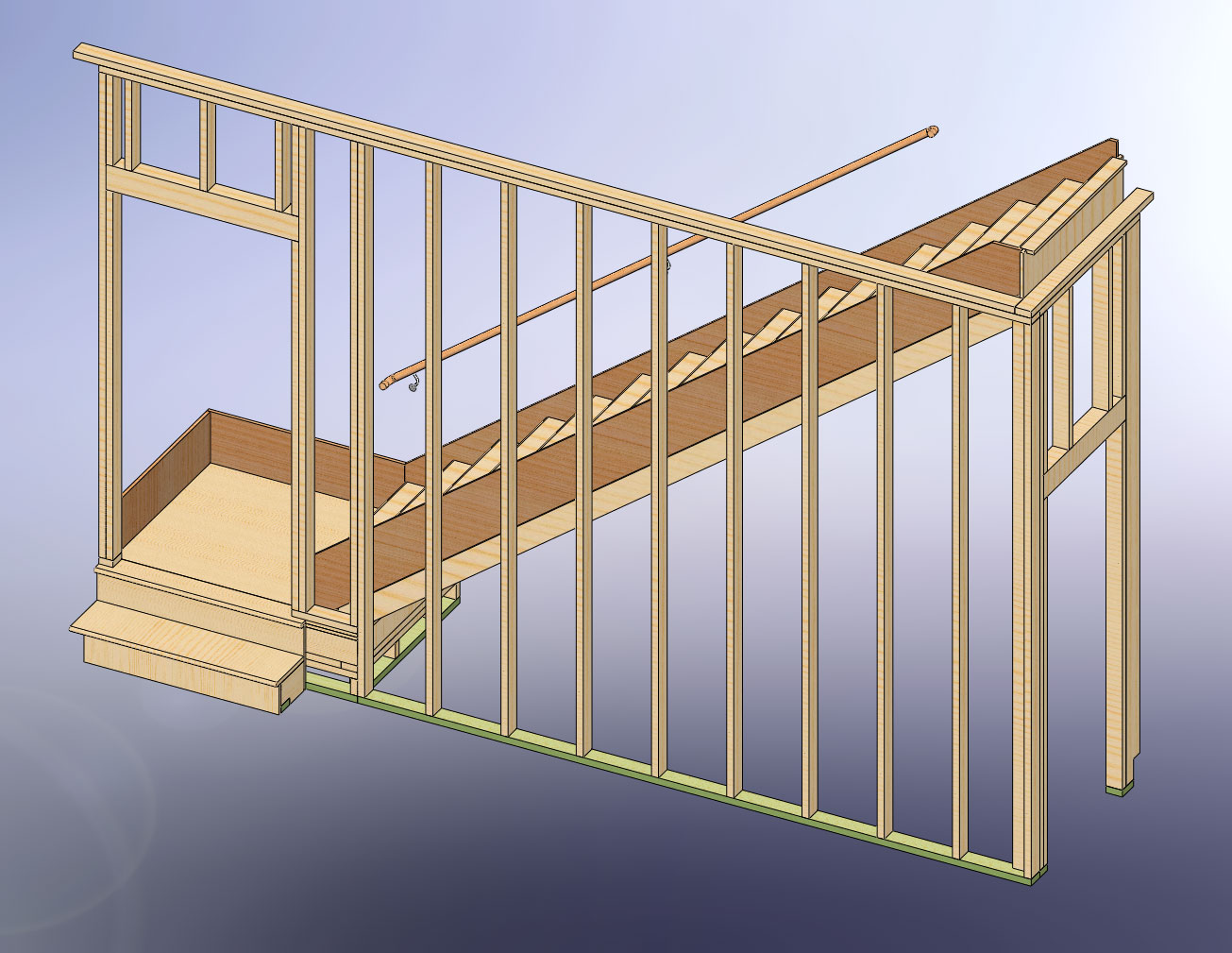 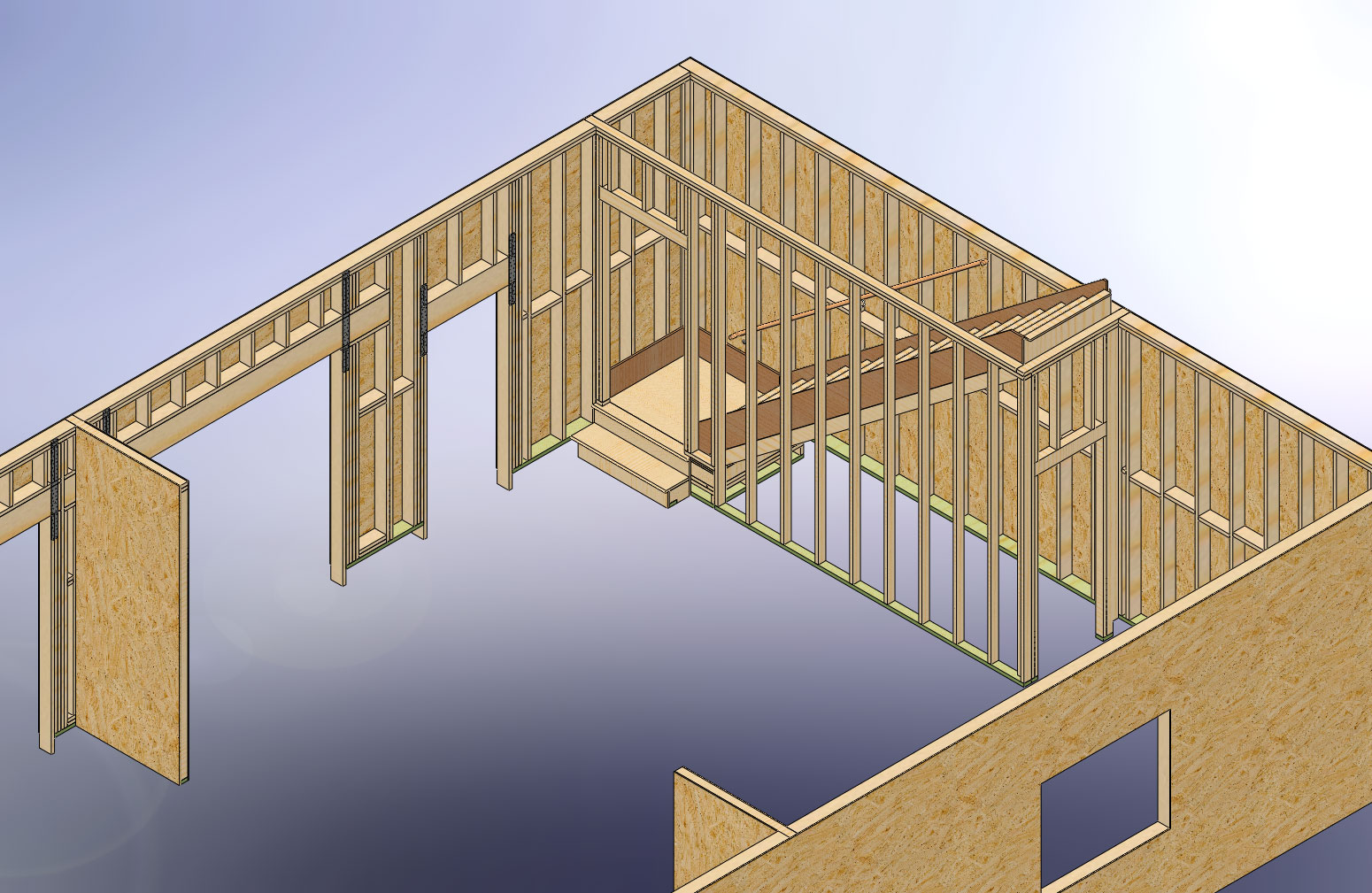 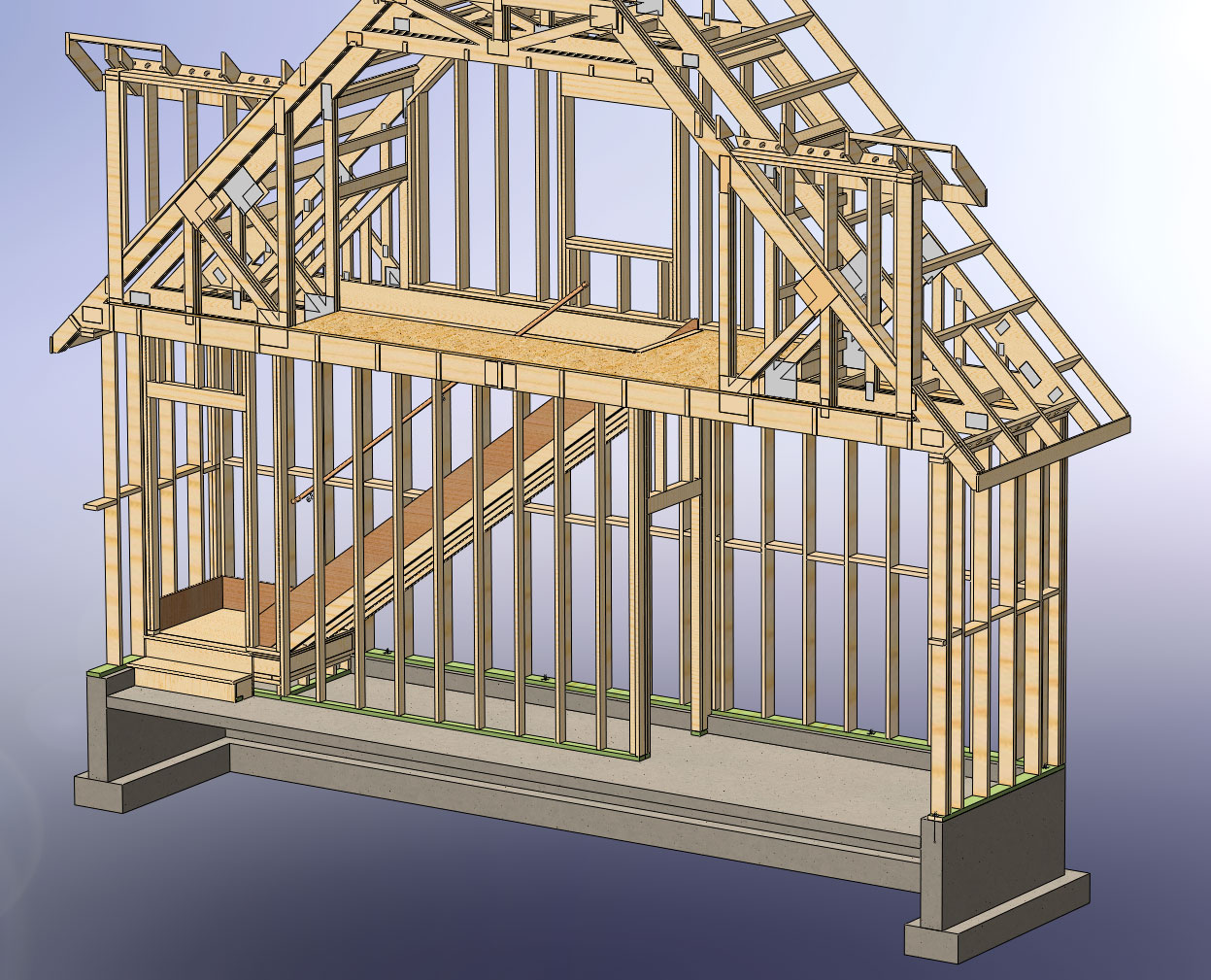 Framing of the landing below as well: 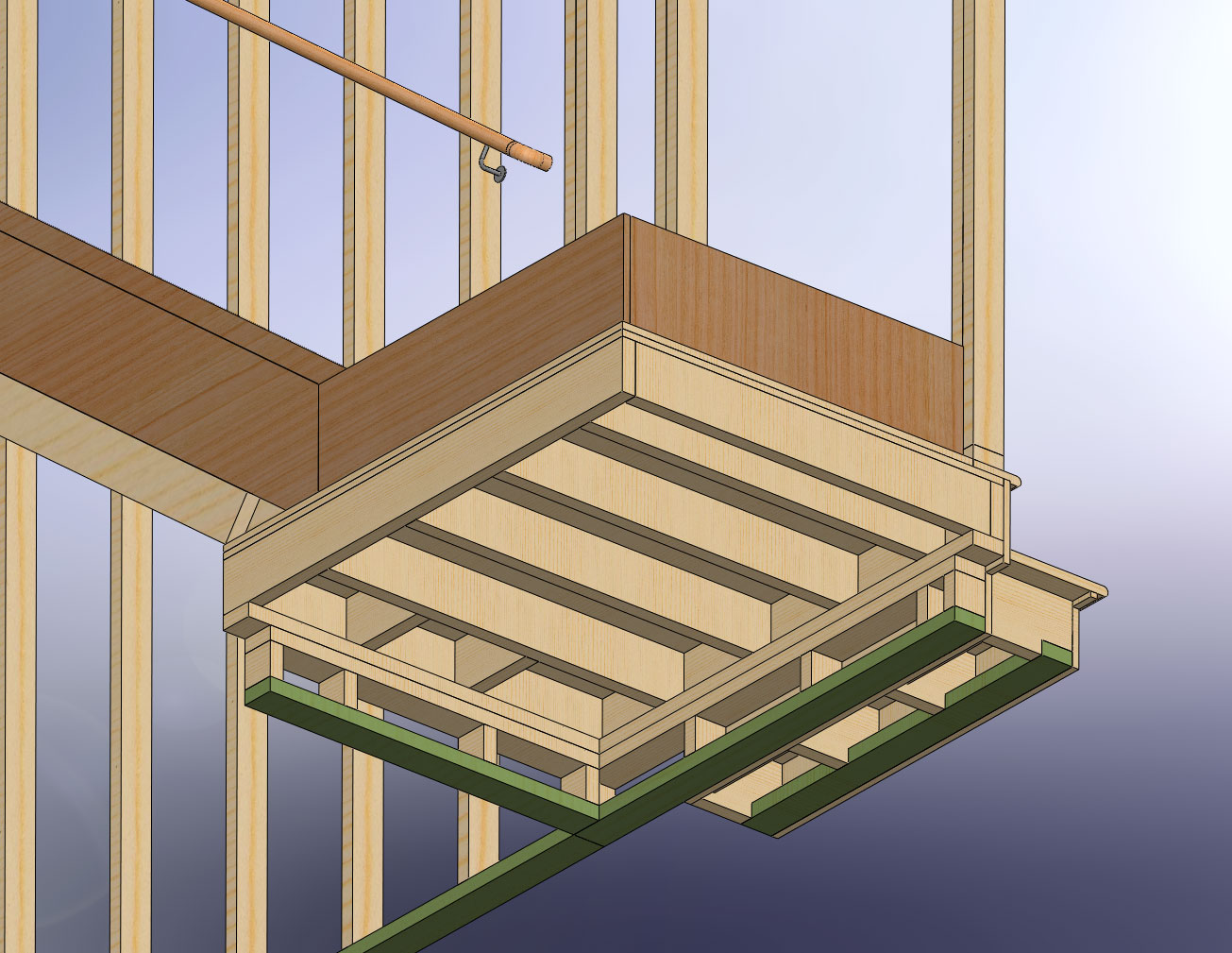 January 13, 2013, 12:47:08 PM
Currently working on a new garage design with attic and dormers.  This one will be a 3 car garage with a stemwall foundation, 12/12 roof with attic and dormers.  Similar to the previous shop design I will be adding and alternate upstairs floorplan that has an apartment/living quarters for a single or dual occupancy.  Unfortunately, I have been very busy with other engineering work and am just now getting back to the site.

I've attached a couple screenshots below of the work in progress.  Note, that this time around I am going with a drop top chord on the gable truss so that I can use 2x6 outlookers.  For high wind areas I think this is the better way to go.  It also eliminates the thorny issue of cutting into pre-manufactured trusses. 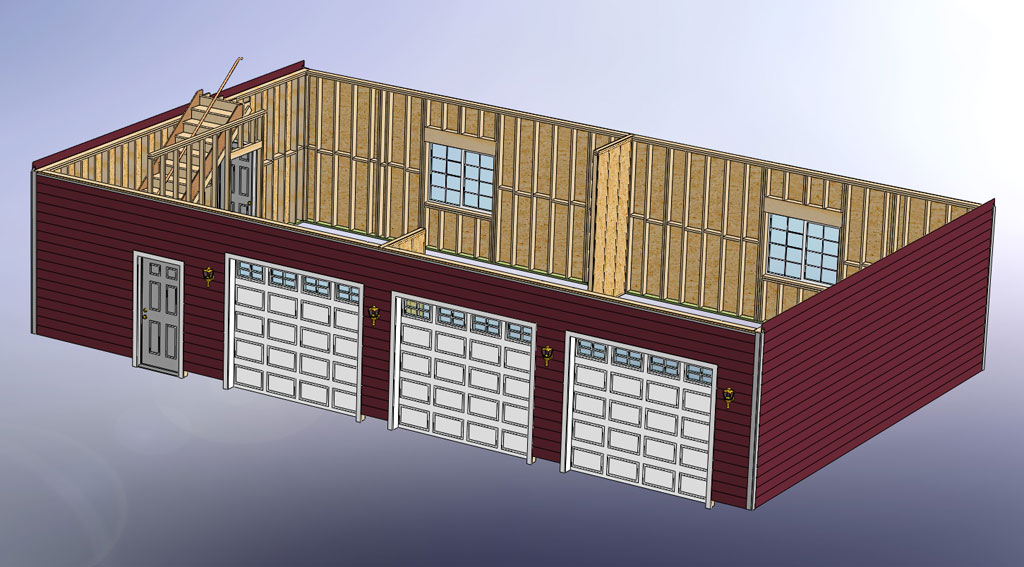 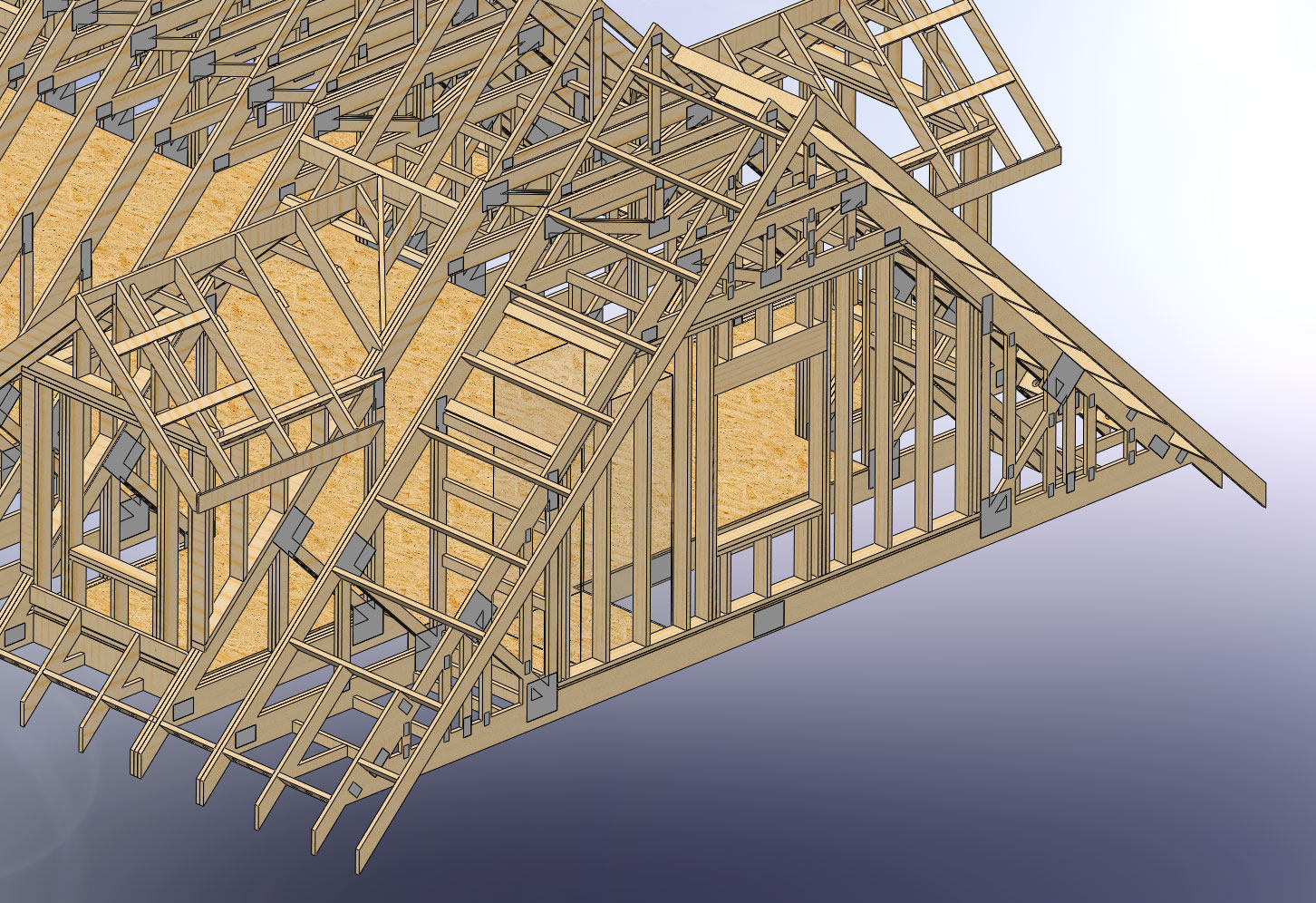